There has been no “trickle down” from the Reagan era income tax cuts. None. Indeed, what has transpired since the 1980s in this country is riches have been “gushing up” to the richest people. Now the Republicans are trying to make them “gush up” even more powerfully. This has to stop.

The average American’s purchasing power is at historic highs. The only hiccup in the steady growth of this bellwether of our economy was in 2009 during the Great Recession. Even so, in 2016 our average purchasing reached a record $57,467 according to the World Bank. That’s good. 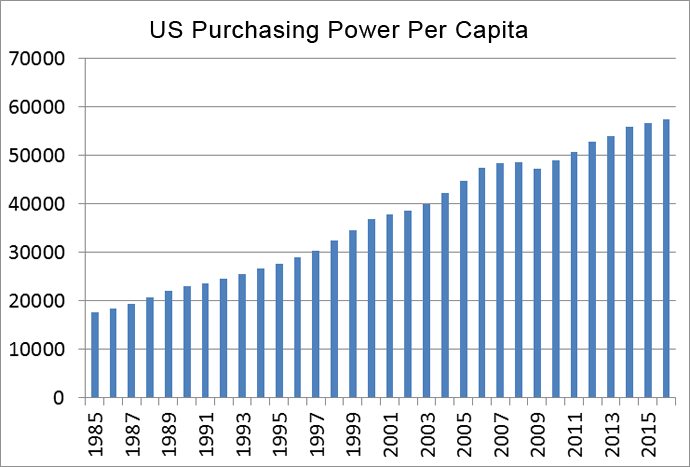 But, this burgeoning wealth is not being distributed efficiently or fairly. In 1980 the top one percent of income earners in the United States garnered 12% of the national income, while the bottom fifty percent earned 20%. The Reagan tax cuts have flipped that historical relationship with the top one percent now taking the lion’s share. See the exhibit below: 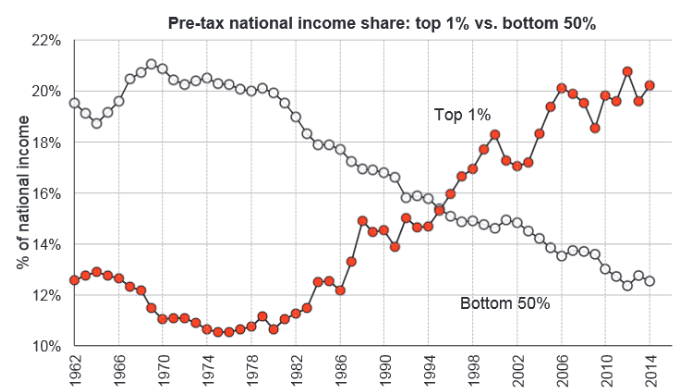 The one-percenters really haven’t noticed the difference, but the rest of us have. Even Warren Buffett argues for higher taxes on the rich.

In order to close this dangerous gap in how income is distributed in our country first, we need to raise taxes on the super rich. Second we need to have a national minimum wage of $15. Third, we need to repeal past legislation that has weakened the collective bargaining power of union members.

Evidence: Below is a representation of how tax rates have changed over the years. 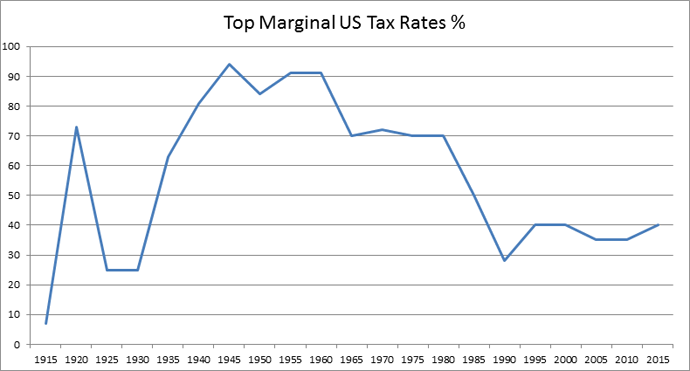 As multi-billionaire Warren Buffet explained in his 2011 Op-Ed for the New York Times, one of the main problems is that taxes on investment income are much lower than taxes on wages.

“Last year my federal tax bill — the income tax I paid, as well as payroll taxes paid by me and on my behalf — was $6,938,744. That sounds like a lot of money. But what I paid was only 17.4 percent of my taxable income — and that’s actually a lower percentage than was paid by any of the other 20 people in our office. Their tax burdens ranged from 33 percent to 41 percent and averaged 36 percent. If you make money with money, as some of my super-rich friends do, your percentage may be a bit lower than mine. But if you earn money from a job, your percentage will surely exceed mine — most likely by a lot.”

Warren Buffet argues for a higher tax rate for the rich, particularly for the super-rich.

My friends and I have been coddled long enough by a billionaire-friendly Congress. It’s time for our government to get serious about shared sacrifice.”

It seems quite reasonable to return to top marginal tax rates of 70%, common before the Reagan tax cuts, and this top tax bracket should start at $1,000,000 as Warren Buffett suggests. Similar changes are needed for the capital gains tax rates.