Immigrants to the United States, and particularly to Orange County, have always provided our country and our county useful work, economic growth, and good ideas. Immigration policy must reflect this reality, and include a dose of American compassion as well. Please read my long standing views as I wrote on this topic for the Los Angeles Times in November 27, 1994:

Xenophobic Fears About a ‘Nonwhite Majority’ Are Nonsense: The wealth of cultural diversity that immigration brings should be celebrated rather than dreaded.

For some reason Gov. Wilson feels compelled to keep assuring us all (in his election night victory speech and more recently at the Heritage Foundation in Washington) that Proposition 187 had nothing to do with racism. I guess he missed Pat Buchanan’s recent rhetoric: “A nonwhite majority is envisioned if today’s immigration continues.” That’s a very interesting statement. You might stop reading here and reflect a moment about how you feel about the comment. Really, stop reading now until you’ve decided how you feel about ” . . . a nonwhite majority.”

If your reaction to Buchanan’s prediction is, “So what?” then you’re a fair-minded person. If your reaction is joy, perhaps you’re currently a so-called “minority” gloating over your anticipated new political power. Or, you might be happy in a good way, celebrating the wealth of the cultural diversity that Buchanan foretells.

Unfortunately, some of you are reacting in the way Buchanan intended, with fear and dread. If these last are the feelings Buchanan’s prediction evokes, you need to go to the nearest mirror, look yourself in the eye, and say aloud, “racist.”

These fears that Buchanan and some others appealed to during the Proposition 187 debate hark back to the Orange County, California, of 1919. Back then, in rural Orange County, the Farm Bureau (the equivalent of the Chamber of Commerce in urban America) passed a resolution that in part said, “WHEREAS, the Japanese population in California is increasing rapidly and WHEREAS, these people will always remain in our midst an alien element unassimilated and unassimilable, and WHEREAS, their presence here lays the foundation for a race problem more serious than any that ever confronted us and may lead to armed conflict . . . RESOLVED, by the directors of the Orange County Farm Bureau, that our senators, Hiram W. Johnson and James D. Phelan, and our representative William Kittner . . . be asked to use their best and utmost endeavors in favor of the following propositions, to wit: . . . rigorous exclusion of Japanese as immigrants . . . that Japanese shall forever be barred from American citizenship.”

The Congress back in the 1920s did pass laws that severely restricted Japanese immigration. Yet consider how wrong the Farm Bureau directors were.

The Orange County of today counts among its prominent citizens many people of Japanese ancestry. We even have street names like “Sakioka Drive” and “Yamaha Way.” A 10-year-old named Casey Okuma recently very well represented Irvine in the national Pitch, Hit and Run competition in Arlington, Texas. At UC Irvine, consider the most common surname among our students, “Nguyen.” Indeed, are the sons and daughters of the most recent wave of Asian immigration, the Vietnam War refugees, “unassimilable?” Apparently not, judging by their marks in the classes I teach.

In fact, I do not find it a problem to be working on a campus with a “nonwhite majority” of students. The diversity of cultures among our students enriches the campus experience for all of us. Yes, it’s not always easy. We do have conflicts among different groups. However, ideas are put up on the table for discussion that might not otherwise be in a more homogeneous environment. And that’s where the creativity comes in American society. Indeed, one of Orange County’s most prominent companies, AST Research, was founded only 15 years ago by three Asian immigrants.

What is a “nonwhite majority” anyway? Buchanan and the others simply lump together those of Asian, African and Latin American heritage into a threatening majority. But just ask an Asian American or an African American if he or she feels like part of some powerful majority in Los Angeles, where Anglo Americans are a minority now. Indeed, it really is kind of stupid to lump together Asians, for example. They don’t do it. The Japanese culture is quite different from the Korean or Chinese or Vietnamese. Certainly these folks of Asian heritage have had their own conflicts historically, although not so much here in the states.

Likewise, how about Hispanics? How different are the views and lifestyles of immigrants from Mexico, Cuba, Argentina and Spain? And how do you count someone who has emigrated from the Dominican Republic, perhaps a fellow with African ancestry that speaks Spanish as his first language. The concept of a nonwhite majority is really nonsense, a hateful nonsense created by bigots.

How should I count myself? My surname is Scottish. My dad hopped a ride on a freight car in 1935 to “emigrate” from Nebraska to San Francisco. There he met my mother, a fifth-generation Californian. Her ancestor, Pedro Amador, had arrived in the Bay Area with the Portola expedition in 1769 and stayed. My great aunt on my mother’s side can remember her grandfather telling her how “those damned Americans” flooded into Alta California, then part of Mexico, and wrested away the land from his parents.

As shown below, the growth in immigration has been dramatic in the past two decades. This growth could not be coming at a better time. Baby boomers are beginning to need the help from the younger people legally becoming citizens. As for Donald Trump’s claims that immigrants are “… bringing drugs. They’re bringing crime. They’re rapists…”, the graphs below show a different pattern. While immigration has increased since 1995, crime rates have decreased during that same period. 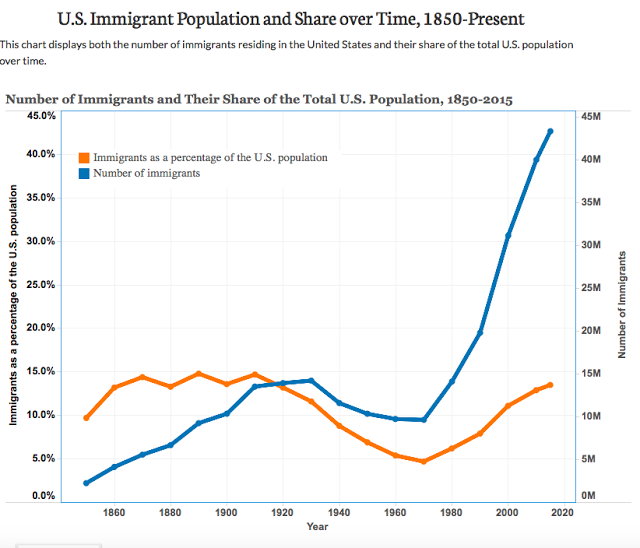 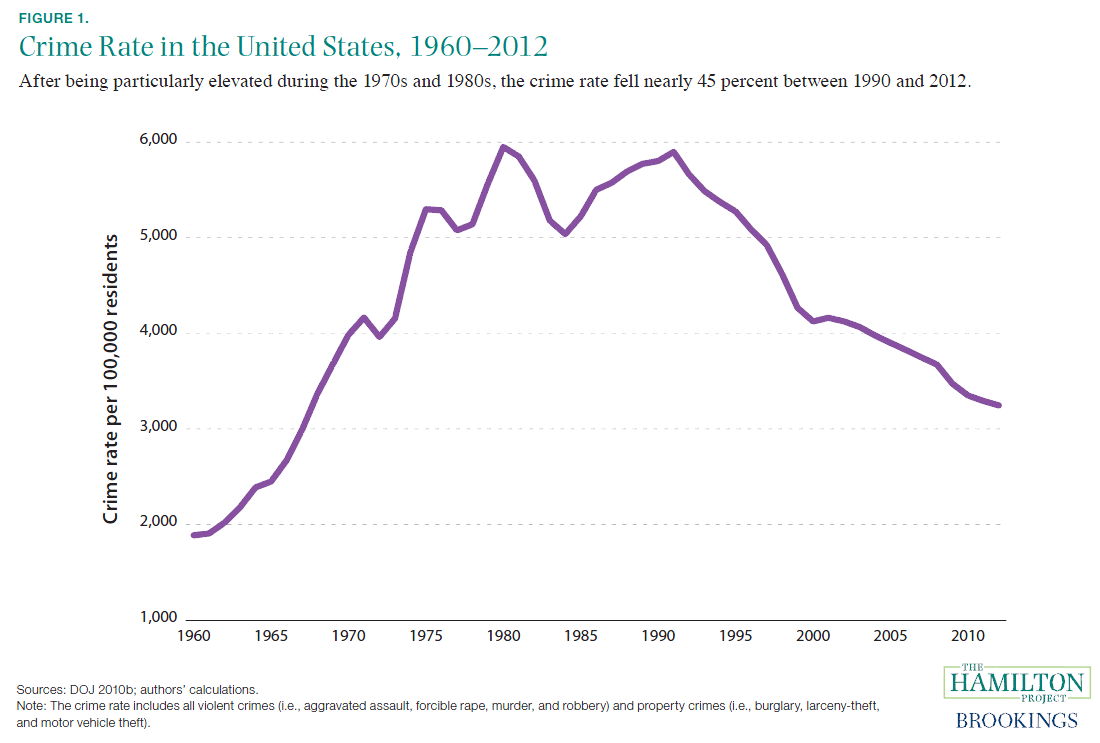