Very large companies and super-rich individuals control the country. Through their huge donations to both political parties, they literally dictate to your representatives in Washington. If you are merely an employee or a consumer, this system works directly against your well-being. Moreover, this system is not what our Revolutionary War forefathers described in the The Declaration of Independence and The U.S. Constitution:

“…governments are instituted among men, deriving their just powers from the consent of the governed”
-The Declaration of Independence

“The Congress shall have the Power…To regulate Commerce with foreign Nations, and among the several States, and with the Indian Tribes”
– The Constitution

The intended power pecking order implied in the most fundamental documents of the country is:

Despite the warnings of Presidents like Washington and Eisenhower, the pecking order has now been reversed, “We the People” are on the bottom:

companies (and the rich) > government > people

As a result, individual freedom and power has been frighteningly reduced.

There are four solutions that come immediately to mind. (1) Strengthen anti-trust legislation and enforcement; (2) amend the Constitution to dismiss the notion of “corporate personhood;” (3) campaign finance reform; and (4) elect nonpartisan representatives.

The so-called Robber Barons of the 19th Century were brought to bear by Teddy Roosevelt’s trust busting and the consequent enactment and enforcement of anti-trust legislation. One hundred years later we are due for another dose of this medicine. 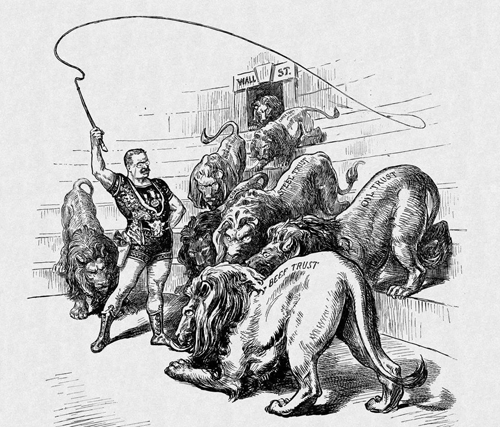 Because the 14th Amendment and precedents in related U.S. case law grant person-hood to corporations, there are few limits on their freedom to donate to political campaigns. And, boy, do they give. Only about 10% of campaign finances come from small individual contributors, the rest from corporations (through PACs) and the super rich.

How did this situation come to be? As explained by Nina Totenberg on NPR: “..for decades, candidate elections remained free of direct corporate influence under federal law. Only money from individuals and groups of individuals — political action committees — were permitted in federal elections.

Then came Citizens United, the Supreme Court’s 5-4 First Amendment decision in 2010 that extended to corporations for the first time full rights to spend money as they wish in candidate elections — federal, state and local. The decision reversed a century of legal understanding, unleashed a flood of campaign cash and created a crescendo of controversy that continues to build today.” 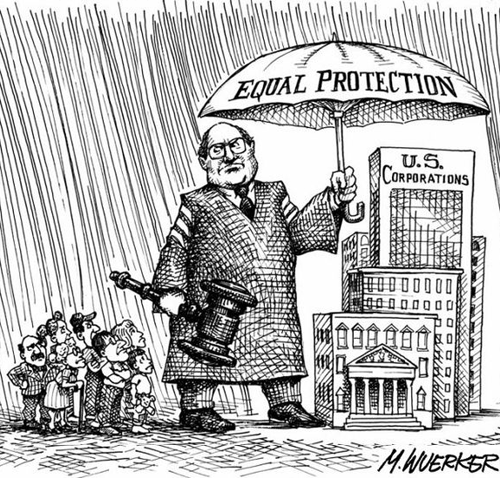 The corporations are controlling Congress through their big donations and heavy lobbying. Consider the case of Big Tobacco donations to local and national candidates. Indeed, Altria, the American tobacco giant, is one of Mimi Walters’ biggest donors. You should ask her if those donations influence her votes on relevant legislation. She will immediately answer, “Of course not, that would be illegal.” Almost every sitting politician in the country will give the same answer. This is where the culture of lying in Washington DC emanates. This is the biggest whopper fed the American people.

Big Tobacco is just the tip of the iceberg on the bribery of Congress, some call it lobbying. Your typical Congressional incumbent around the country spends more than half his time, sometimes 6-8 hours per day, raising money. And then he spends about eighty percent of that on mass media advertising in the last few weeks of her campaign. Little of that advertising regards actual information on issues. We’ve all seen and heard the attack ads the flood the air waves. If he has a safe seat, he may dole out some of his campaign war chest to her fellow party members who are facing tougher opponents. Then he’s buying power within his own party. As of one year out, Mimi Walters has already raised more than $1.4 million.

American industry exerts huge power over government through campaign donations. While the U.S. Constitution specifies that Congress is “To regulate Commerce with foreign Nations, and among the several States…”, it often seems that the companies are controlling the Congress. In 2010 Altria Group/Philip Morris USA spent over $10 million on its lobbying efforts in the US. Big Tobacco spends at least $1 million on Democratic Party candidates in each two-year federal election cycle and in the last two decades has spent four times that on Republican candidates. In the 1996 campaign the tobacco interests donated $8.6 million to Republicans vs. $2.0 million to Democrats. Earlier that year President Clinton had ordered huge restrictions on cigarette advertising directed at children.

One most actionable approach is to elect candidates like me that accept no donations. I will be paying my own costs of electronic and social media and perhaps a few yard signs. I am depending on volunteers to schedule discussions with their friends and world of mouth testimonials. There is no reason that Congressional campaigns cannot be won on the cheap like this. Indeed, we should all thank Donald Trump for changing the game of elections in the United States.

Our country’s first president warned us about the danger of political parties long ago.

“The alternate domination of one faction over another, sharpened by the spirit of revenge, natural to party dissension, which in different ages and countries has perpetrated the most horrid enormities, is itself a frightful despotism. ”
– George Washington’s Farewell Address, 1796

The two party system has led to an epidemic of gerrymandering – collusion between Republicans and Democrats to strengthen their incumbencies by drawing party-favorable Congressional districts. Incumbency naturally limits both new ideas coming to the fore and the power of voters.

The two party system prevents out of the box thinking. The best policies and laws will be developed by Congress through what we call inventive negotiation. This process will involve Democrats, Republicans, and third party and independent representatives working together in creative ways. While deadlock is disaster, compromise isn’t really much of an improvement. The best decisions will entail thinking outside the partisan box.

When the US Congress shut down the government in the fall of 2013, it was diversity that got it up and running again. According to Time Magazine’s cover story, Women Are the Only Adults Left in Washington: “At one of the darkest moments of the government shutdown, with markets dipping and both ends of Pennsylvania Avenue hurling icy recriminations, Maine Republican Susan Collins went to the Senate floor to do two things that none of her colleagues had yet attempted. She refrained from partisan blame and proposed a plan to end the crisis.”

Other women senators stood behind her. Indeed, most of the 20 women in the Senate had met informally the night before over pizza, salad, and wine in the Senate offices, and they had discussed several ways to compromise. None of the old cigars and poker chips there. No bluster or bluffing, just respectful positive discourse. Ultimately, Senate leaders Harry Reid and Mitch McConnell were shamed into better behavior; a different sort of discourse among the women had led directly to more inventive options.

Congress is currently full of those who vote along party lines, disregarding what they know to be in the best interests of their constituents and the country at large. The only way out of our current mess is to elect those who are not tied tightly to a political party, who will formulate and vote for legislation based on rational consideration rather than party loyalty.

For a humorous and disturbing look at how much time and energy Congresspeople spend raising funds, see John Oliver’s coverage of this issue at Fortune.com.