Ordinarily I hate bumper stickers. The one I do like says, “If you think education is expensive, try ignorance.” It’s not always easy to see the payoffs of expenditures on public education, particularly when it’s not your kids you’re spending the money on. But let’s fast forward a couple of decades to 2040. Do you want smart executives managing the companies that provide your pension payments or manage your investments? Do you want smart doctors and nurses providing your healthcare? Do you want smart scientists finding new solutions to disease, travel, and communications problems? Do you want smart political leaders running the city, state, and country in which you will live?

The current laws that disallow bad student loans to be discharged in bankruptcy is a kind of indentured servitude outlawed in this country more than a century ago.

Of the estimated $1.4 trillion outstanding as student loan debt most will be repaid. Recently the Economist magazine estimated that of the 43 million Americans with student loans, 7 million (or about 16%) are in default.

The rules disallowing bankruptcy must be eliminated. Why should student loans be treated differently from credit card debt? Why should students defaulting on student loans be treated differently than Donald Trump? Indeed, Politifact reported in 2015: “Hundreds of companies” have filed for bankruptcy, Trump said earlier in the debate. “I used the law four times and made a tremendous thing. I’m in business. I did a very good job.”

Providing relief through bankruptcy to students and graduates with financial difficulties should be only the first step in resolving this huge fiscal burden we’ve pushed into the future and onto our young people.

Most folks I talk to in Orange County think federal support of public schools is a very bad joke. Washington issues the standards, but not the checks. No local education leaders I’ve talked to believe that schools are getting better in this environment of budget slashing. So, how do we substantially improve our schools?

Competing for schools funding at the federal level are expenditures on our unneeded weapons systems. Fundamentally, leaders in Congress are choosing to buy guns instead of books. We’re spending some $600 billion per year on the world’s best military – jet fighters, nuclear submarines, and such from Boeing, Lockheed, and Northrop-Grumman. Meanwhile, a Brookings Institute study found teacher pay in 26 countries to be higher than that in the U.S. Moreover, the percentage of education expenditures going to teachers has declined steadily from more than 50% in the 1960s to less than 40% now.

I am proposing a mere $28 billion per year increase in federal spending for public schools. Such new spending is in concert with John Locke’s 17th century advice about defense: “The best fence against the world is a thorough knowledge of it.”

Compared to other countries public education in the United States is an embarrassment. At 5.3% we’re 57th out of 160 countries when it comes to educational expenditures as a percentage of GNP. At 180/year we’re way below our competitors when it comes to days in school. Chinese, Japanese, and German kids all go to school more than 200 days/year. We’re at 180! The nine-month schedule no longer makes sense in the air-conditioned services economy of the United States circa 2020.

Improving education is simple. Get smart teachers and keep them. This means spending money, paying K-12 teachers higher salaries. Here’s the package I’ll work to put on the table for teachers: (1) a one-time $10,000 pay raise and (2) a ten-month schedule instead of nine. Higher pay will attract better people and keep them from distracting second jobs.

There are 2.8 million K-12 public school teachers in America. The immediate cost of this investment will be some $28 billion (although about 20% of that will come back in the form of income taxes). There will be substantial childcare and other savings associated with a ten-month school year and ultimately a big payoff to all aspects of society.

Long-term payoffs include areas like healthcare (smarter scientists will make breakthroughs) and international relations (foreign language skills will promote cooperation with our neighbors). Indeed, consider how urgent the need is for smart people to work on looming societal calamities like Alzheimer’s disease.

One of the best books I’ve read in the last decade is Malcolm Gladwell’s The Tipping Point: How Little Things Can Make a Big Difference, a national best seller. He tells the story of the “Broken Window Theory” on page 141:

“Broken Windows was the brainchild of the criminologists James Q. Wilson and George Killing. Wilson and Killing argue that crime is the inevitable result of disorder. If a window is broken and left unrepaired, people walking by will conclude that no one cares and no one is in charge. Soon, more windows will be broken, and the sense of anarchy will spread from the building to the street on which it faces, sending a signal that anything goes. In a city, relatively minor problems like graffiti, public disorder, and aggressive panhandling, they write, are all the equivalent of broken windows, invitations to more serious crimes.”

The authors go on to report that former Mayor Rudy Guliani and William Bratton (former LA Police Chief) reduced crime in New York City during the late 1990s by first cleaning up the little things, by applying the “Broken Windows Theory” to the streets of New York.

Applying these ideas to our public schools suggests that a deteriorating physical plant will cause disorder – including the weapons, drugs, bullying and so on so prevalent and so disruptive in inner-city schools today. Does this apply to public schools in Orange County? You bet it does.

Do your children attend class in a portable? Even with a new coat of paint and when generally well kept up, portables still visually and virtually “scream” at your kids that schools are not very important places. Why should a kid have respect for a teacher working in a cheap, temporary classroom? 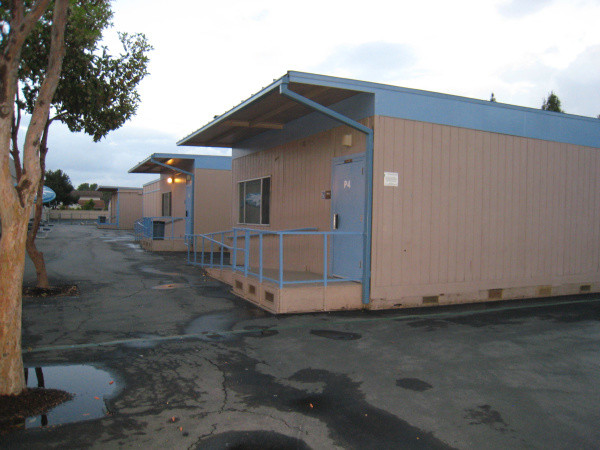 As part of the much needed and talked about federally supported infrastructure improvements in our country, an important effort will be the elimination of portables from public schools.

Students, teachers, and parents are used to portable classrooms. Of course, they were originally designed as a temporary solution to student population volatility in school districts. But, now we don’t notice their deleterious effects on education.

Imagine for a moment housing for new teachers that might be built right on elementary and high school campuses in your area. Classroom sized, permanent structures would make ideal sized studio apartments for young teachers. And, if the design were done creatively, then these studio apartments might be easily converted into classrooms when student populations inevitably rise, and back to apartments again when they inevitably fall.

As volatility in the home construction industry in this country continues, public building projects like this make great sense. Let’s make this a national campaign by working together as partners. Contact us and tell us your ideas about replacing portable classrooms with affordable housing for teachers on campuses in your area.