Free Trade was criticized by both Hillary Clinton and Donald Trump. Bernie Sanders also pitched in his uninformed criticism. And speaking of uninformed, or should I say ill-informed, criticism, we have my former UCI colleague, Peter Narvarro working in Trump’s White House.

Yes, we must put more effort and money into retraining laid-off American workers, no matter the cause, foreign competition and/or automation. But, overall free trade is essential for prosperity in the United States, progress for human kind, and the preservation of peace on the planet.

The 45th Congressional District stands in the middle of Orange County, one of the most vibrant international trade centers in the country. The county exports more than $25 billion dollars per year in goods and services. Think of companies in manufacturing like Allergan, Boeing, Edwards Lifesciences, Kingston, and Vizio. Big firms exporting services to OC international visitors include Disney, South Coast Plaza, St. Joseph Health, and UC Irvine. More than twenty percent of OC employees works for such companies and their smaller business associates and vendors.

The causal relationship between trade and peace is now an axiom of international relations and is supported empirically by a variety of economic analyses. The strongest evidence is provided by Solomon Polachek at SUNY Binghamton and Steven Pinker at MIT. Pinker opines, “…you can’t kill someone and trade with him too.”

Free trade also yields prosperity. Ross Perot predicted a “great sucking sound” of American jobs flowing to Mexico as a consequence of the North American Free Trade Agreement (NAFTA). However, unemployment in the Unites States fell every year between its 1994 passage and 2000. Moreover, the average per capita income of Americans increased unhesitantly from 1994 to the present (with the exception of the Great Recession in 2009). American incomes have risen now from $37,000 to well above $50,000 during the last two decades. Sorry Mr. Perot, there’s not been even a sucking whisper.

Likewise, freer trade with China has had no negative effects on the steady growth of American prosperity. In 2000 the United States granted Permanent Normal Trade Relations (PNTR) to China. A year later China was given World Trade Organization (WTO) membership. Both allowed freer trade between our two countries. Prosperity persisted in both countries. Unemployment in the United States did tick up 1.3 percent between 2001 and 2003, but the contemporaneous effects of the 9/11 tragedy and the .com bust are hard to disambiguate. By comparison, unemployment here exploded by almost four percent during the Great Recession. And, almost all analysts blame domestic decisions for that debacle.

Bernie Sanders and his followers attribute the dangerous bifurcation of the American economy and society to free trade. Anecdotes can mislead, but data don’t lie. During the last three decades free trade agreements have been implemented with no negative impacts on the steady growth in prosperity for the average American. The culprits in our story are domestic – the rich don’t pay their fair share of taxes and the Republican Congress has hobbled labor laws, thus delivering lower wages. These are not international problems, they are internal political problems. The complaints about foreigners by Donald Trump and his cronies, such as my b-school colleague at the University of California, Irvine, Peter Navarro, are not based on careful analysis. Something else must be at play.

Finally, free trade has also delivered a few other things to us Americans. Consider the smart phone in your pocket. It’s the consequence of innovative thinking here and in places like Finland, Japan, South Korea, Germany, and China. Without free trade, only the rich in this country would have smart phones, and those bricks wouldn’t fit even in their deep pockets. 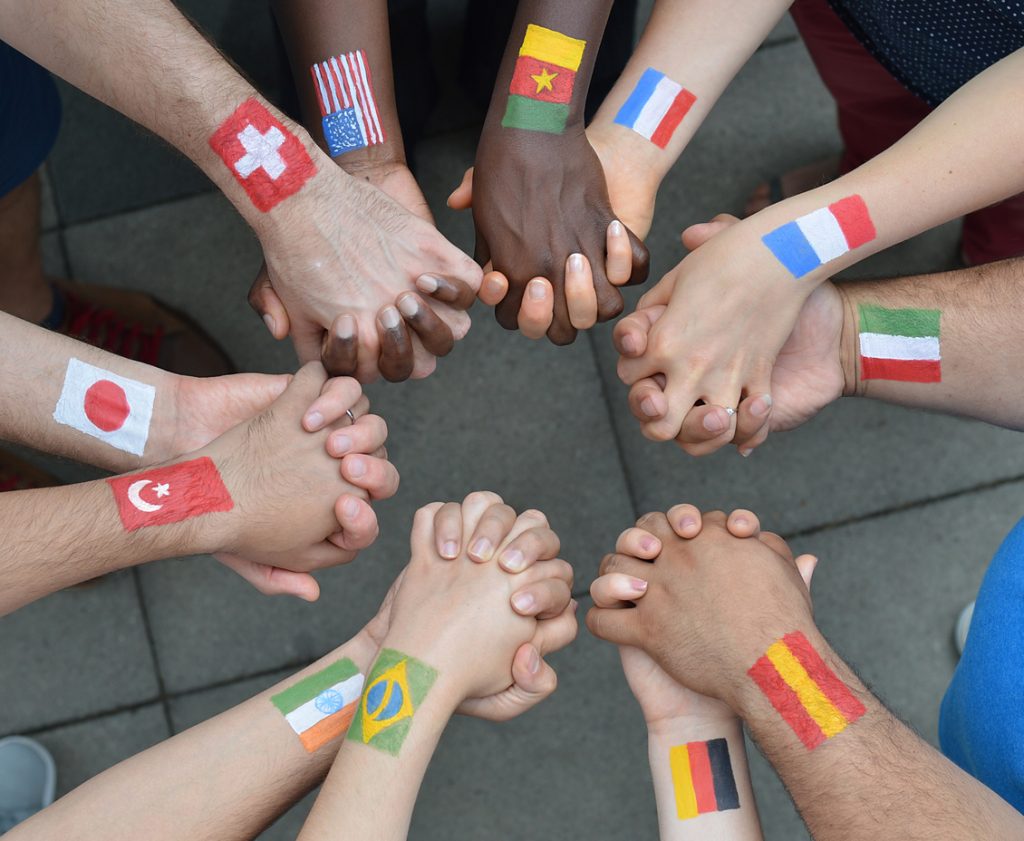 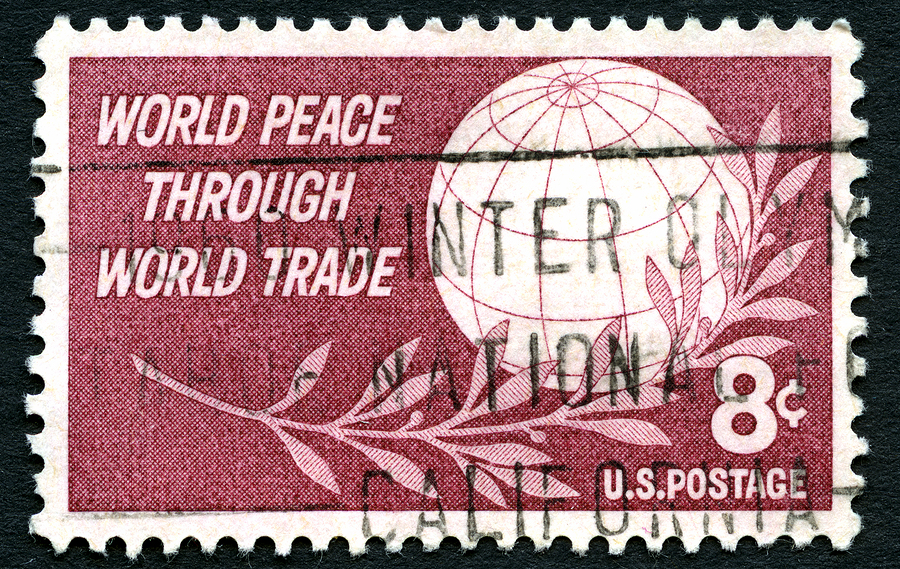 And, while we have prospered during the last twenty years, so have our trading partners, particularly those in Mexico, Canada, and China. As Adam Smith predicted, free trade works.

Trade causes peace through increased understanding and interdependence. Less trade causes less of both these things. In the 20th century Lee Kuan Yew, the first leader of an independent Singapore, Robert Zoellick, United States Trade Representative, and even psychologist Steven Pinker all agreed that trade causes peace. Indeed, Pinker’s conciseness is notable, “…you can’t kill someone and trade with him too.”

Now I appreciate that the Trump administration and the anti-globalization folks disagree, in some cases violently. However, the causal relationship between trade and peace has been proven empirically by economists. The work most prominent in the area, and the work that serves as the other academic anchor of our efforts at our Center, is that by Solomon W. Polachek. He explains in his crucial paper about international relations, “The results show that the fundamental factor in causing bilateral cooperation is trade. Countries seek to protect wealth gained through international trade, therefore trading partners are less combative than nontrading nations.”

Let’s look at the numbers.

The only discernable disruption in the continuous gains in purchasing power of Americans in the most recent decades was caused by the Great Recession (see the graph below). That was an All American problem. Free trade has also dramatically benefited our top trading partners – Mexico, Canada, and China. 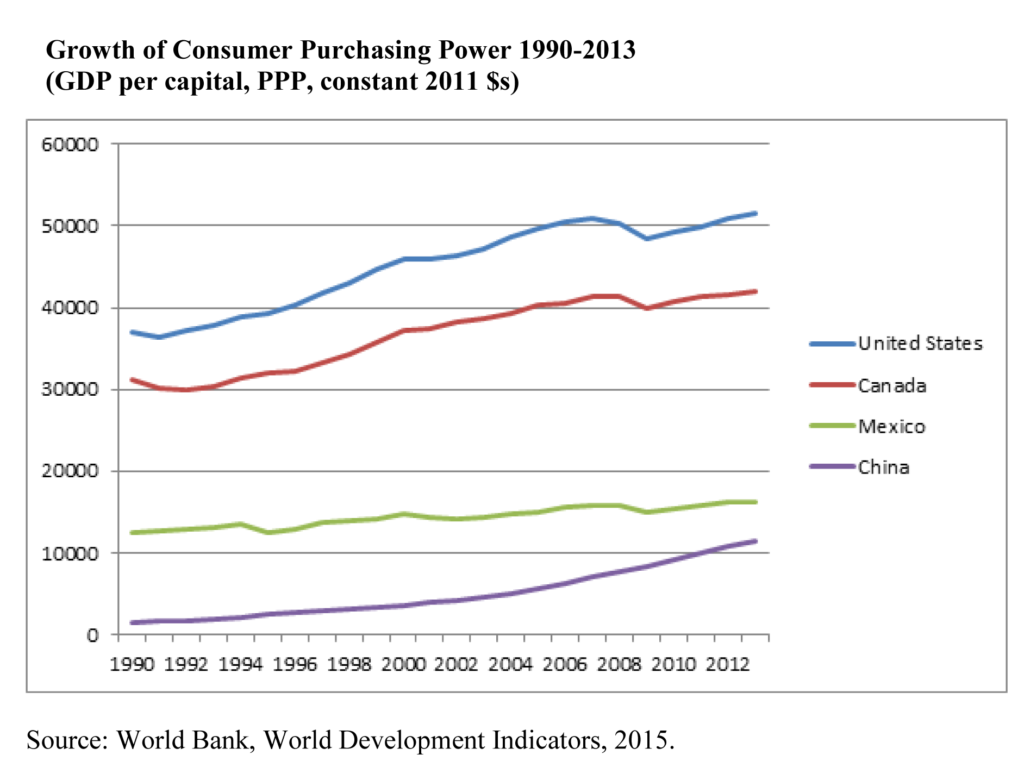 In the graph we look at the growth in purchasing power of the average consumer (controlling for both inflation and currency fluctuations) since 1990 in the United States, Canada, Mexico, and China. During the time period 1990-2013 consumers in all four countries have enjoyed a growth in their income: U.S. 39%, Canada 35%, Mexico 31%, and China an astonishing 640%.

The two big breakthroughs in free trade in those years for the United States were (1) the North American Free Trade Agreement (NAFTA) in 1994 and (2) the granting of Permanent Normalized Trade Relations (PNTR) in 2000 to China. The Middle Kingdom’s entry into the World Trade Organization (WTO) followed the next year.

Incomes of the average Canadians and Americans continued to climb smartly after the agreement with Mexico. The average Mexican consumer lost about $1000 in purchasing power in 1995, but had regained it by 1997. Since then, NAFTA has yielded growth in all three economies. Moreover, when we do a similar analysis of unemployment in the U.S. we can find no evidence of NAFTA causing a loss of jobs for Americans.

After the declaration of PNTR for China the average American’s purchasing power took a one year drop of $21 in 2001. Note this was also the year of the September 11th terrorist attacks and the dot.com bust. 2002 began a six-year period of steady increases in American’s spending power until the beginnings of the so-called Great Recession in 2008. The American unemployment rate reached its 30-year nadir at an even 4.0% in 2000. It climbed to a local peak of 6.0% in 2002. One might blame the agreements with China for these job losses, but again 911 and the dot.com bust confuse the analysis. Also, the average unemployment rate in the U.S. during 1990-2013 was 5.8%, and excluding the Great Recession years of 2009-2013 the average was 5.2%.

Ross Perot was famous for his predictions about manufacturing job losses due to NAFTA. Both his 1992 prescience and his presidential campaign proved poor. But, in a sense he helped Bill Clinton get elected, which in turn helped free trade and prosperity during the 1990s. The steady decline of manufacturing employment in this country is due to automation, not foreign trade. There are no NAFTA or PNTR effects in those data. Indeed, the biggest drop in manufacturing employment was between 2008 and 2009, dwarfing all previous declines in the last three decades. The most recent employment numbers for the country are 16.7% in manufacturing and 81.2% in services.

Of course my analyses are quite simple. But simply, it is hard to conclude that free trade hurt incomes or employment during the last three decades. Many Americans have and will continue to suffer from the friction of a volatile economy. Indeed, the biggest disruptions have had mostly to do with shortsightedness and omissions of American policy makers and financial leaders. Of course, a dangerous economic divide has been opening between rich and middle class Americans. Free trade in not culpable. The real culprits are domestic decisions made mostly on Capitol Hill, about distribution of wealth, income tax policies, and labor relations. You can see the beginnings of corrections in the last when both Walmart and McDonald’s employees – that is, services workers – begin to protest low wages and expensive benefits.

I love the fact that Trump and the Tea Party are joining the fray, siding with the Democrats. The funny thing is that the Tea Party folks don’t know their own history. Yes, the Boston Tea Party was about taxes (without representation) on tea, but more important was the British prohibition of free trade for the colonies. All the tea from China was coming to America via expensive British ports and middlemen. Take a look at the Declaration of Independence. The document lists the colonists’ complaints about King George. In order, two of them are: (1) “For cutting off our trade with all parts of the world” followed by (2) “For imposing taxes without our consent.” Indeed, the new United States taxed imported tea from 1789-1872.

Free trade is important not only for global prosperity, but also for world peace. And tea is becoming popular in America again.

The income gap between the wealthy and the rest, rather than trade, is the real problem.