Neither of the two biggest airports in Southern California, LAX and Lindberg Field in San Diego, can handle the international air travel that the area needs.

Let’s work as partners to promote the building of a new international airport at the southern end of Camp Pendleton to serve Orange, San Diego, and Riverside counties. The arguments in favor of adding air travel capacity in Southern California have always been strong. International trade brings Southern Californians unparalleled prosperity and peace. Moreover, the main things we export these days are our ideas and our services – the people-to-people marketing of both require excellent airport facilities. But, the gateway to our trade, LAX, is now beginning to resemble a bad Three Stooges routine – Moe, Larry, and Curley all trying to walk through the same door at the same time.


For more than two decades, leaders of San Diego and Orange counties in Southern California have struggled to manage the burgeoning needs of air travelers in the area. One potential solution is prominent — a new international airport at the south end of Camp Pendleton.

Dick Murphy, a former mayor of San Diego, laid out a still-viable plan some ten years ago: “The Camp Pendleton idea is to operate what I would call Southern California International Airport on a piece of Camp Pendleton. Now, we’re not talking about shutting down Camp Pendleton… But the new airport could be a joint venture with Orange County. … I would envision that airport being primarily an international-transcontinental airport like Dulles. So, basically, anybody out of San Diego County or Orange County or Riverside County who wanted to fly overseas or to Washington DC could fly out of that airport.” The project would help create jobs in the region and further open the nation’s most populous state to international trade. Plus, there’s already a rail line to the area that would help flyers get to and from “Pendleton International.” 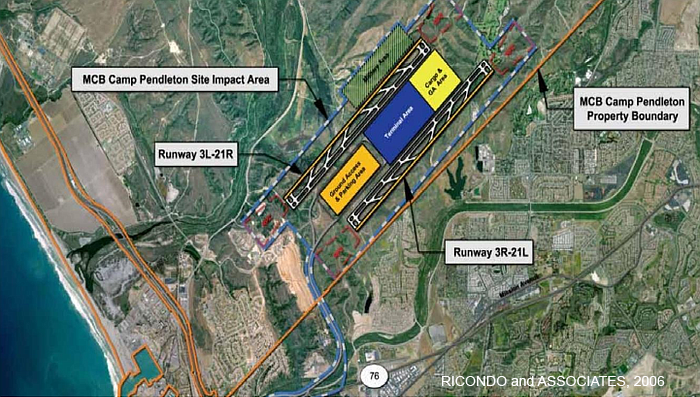 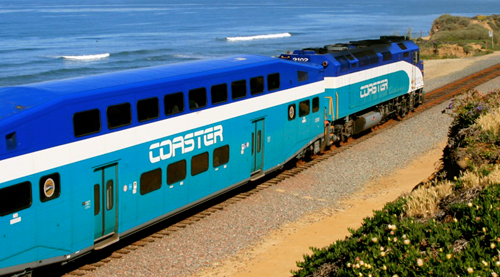 Potential source of transit to the proposed airport

Now for the other side. The Marines and the Department of the Navy want to retain all of the 15 miles of California coastline they now control for training purposes. As the Assistant Secretary of the Navy told us in a letter, “Amphibious landings continue to be an integral part of Marine Corps operations and MCB is the premier amphibious landing training installation on the west coast of the United States…The 1st Marine Expeditionary Force… conduct daily training activities aboard MCB Camp Pendleton, including live-fire operations involving amphibious landings, ground movement, artillery, mortars, tanks, tactical aircraft, and laser systems. The presences of a commercial airport on the base would divide training areas, restrict access to airspace, and adversely reduce opportunities for Marine units to conduct realistic training…”

Can civilian leaders in San Diego and Orange counties and their military counterparts reach an agreement that satisfies both sides?

Perhaps the most famous negotiation parable involves an argument over an orange. The simplest approach was to simply cut it in half, each person getting a fair share. But, when the negotiators began talking to each other, exchanging information about their interests, a better solution to the problem became obvious. The person wanting the orange for juice for breakfast took that part and the person wanting the rind for making marmalade took that part. Both sides ended up with more. And yet neither agreement is particularly inventive. The parable of the orange becomes a story about invention when both parties decide to invest in an orange tree.

The historical reality is that the branches of the military and the federal government have almost always taken a “dividing the orange” sort of competitive approach to the distribution of funding. But in the current federal budget-cutting environment, inventive negotiations are crucial to make the most of every dollar spent.

In this case, the best argument against a joint-use airport on Camp Pendleton is that the Marines need the coastline to practice beach landings. But that tactic hasn’t been used since the Korean War, as Defense Secretary Gates himself pointed out last summer. However, America’s military power does now rest heavily on control of the skies. It could be that building additional air facilities on Camp Pendleton — some of which would be a commercial airport for civilians — could provide additional training opportunities for the military. Perhaps Pendleton International might be closed to civilian use on certain days and made available exclusively for military training exercises.

Negotiation could reveal other ways that a new airport could benefit the military as well as civilians. Perhaps high-paying service jobs could be made available at the new airport for both military spouses and reservists. Moreover, as America’s wars wind down, and as efforts to rein in spending ramp up, soldiers, sailors, airmen, and marines will all be entering the civilian workforce in great numbers. The jobs created by this new international airport could help the substantial population of veterans already living in the Southern California region find employment. There’s already some basis for collaboration between airlines and the military, as a large proportion of civilian airline pilots started as military pilots.

The decision about dedicating part of Camp Pendleton as an international commercial airport need not be just a zero-sum choice between defense infrastructure and trade infrastructure. An inventive negotiation approach that considers the interests of the surrounding communities and the future needs of the Department of the Navy, the Marine Corps, and the marines themselves can result in a unique joint-use facility that accommodates the air travel needs of the seven million residents of the local communities and the ever-changing training requirements of a vital military.

The issue of infrastructure is import throughout the United States. See Rosebeth Kanter’s excellent book to learn more about this topic.