Burning fossil fuels is causing global warming. Global warming is having several deleterious effects on the planet and on humans – more frequent droughts/heat waves, more frequent/severe fires, more frequent/severe hurricanes, tornadoes and storms, shifts in timing and lengths of growing seasons, shifts in zones in which plants/crops can grow, sea level rise affecting coastal and island communities, and changes in ocean temperatures and acidity leading to changes in distribution/size of ocean-dwelling populations.

From the NASA website:
“The current warming trend is of particular significance because most of it is extremely likely (greater than 95 percent probability) to be the result of human activity since the mid-20th century and proceeding at a rate that is unprecedented over decades to millennia.

Earth-orbiting satellites and other technological advances have enabled scientists to see the big picture, collecting many different types of information about our planet and its climate on a global scale. This body of data, collected over many years, reveals the signals of a changing climate.

The heat-trapping nature of carbon dioxide and other gases was demonstrated in the mid-19th century. Their ability to affect the transfer of infrared energy through the atmosphere is the scientific basis of many instruments flown by NASA. There is no question that increased levels of greenhouse gases must cause the Earth to warm in response.”

It is hard to ignore the evidence for the dangers of climate change from the recent wreckage left by Hurricanes Harvey and Irma. Why is this attributable to climate change? Warmer air temperatures lead to warmer water temperatures. Warmer water temperatures in turn lead to greater evaporation and thus, wetter storms. The Gulf of Mexico was between 3 and 7°F hotter than historical averages around the time that Harvey and Irma hit. Since the average amount of moisture the air can hold goes up by about 4% for every increase in degree Farenheit, that means conditions were ripe for a massive amount of water to accumulate in the air. During Harvey, that water was then released over Houston and neighboring cities in record setting amounts – 50 inches in some areas.

Why? Because California’s policies have shown that economic health and environmental health can coexist.

“The agency (California Energy Commission) has now said that by 2020, all new houses shall meet an exacting code called zero net energy — this means having features like thick insulation, tightly sealed windows and doors, and the capa­city to generate all the power they need in a year via the sun or even wind. By 2030, all new commercial buildings will need to do the same.

These energy-saving requirements are just one indicator of how regulators have been able to leverage California’s huge market — 38 million customers — to influence national supply and manufacturing lines. Three years ago, the Energy Commission required that battery-charging systems, like the ones inside smartphones and laptops, be designed to suck less juice. Manufacturers balked because they didn’t want to bear the additional costs — about 50 cents per laptop. But the state insisted. The extra 50 cents, it turns out, saves the purchaser 18 times that cost in energy over the life of the product. That one change alone is estimated to save Californians $300 million a year in electricity bills. The Energy Commission figures that all its efficiency measures have slashed electric bills in California by $74 billion over the past 40 years.” 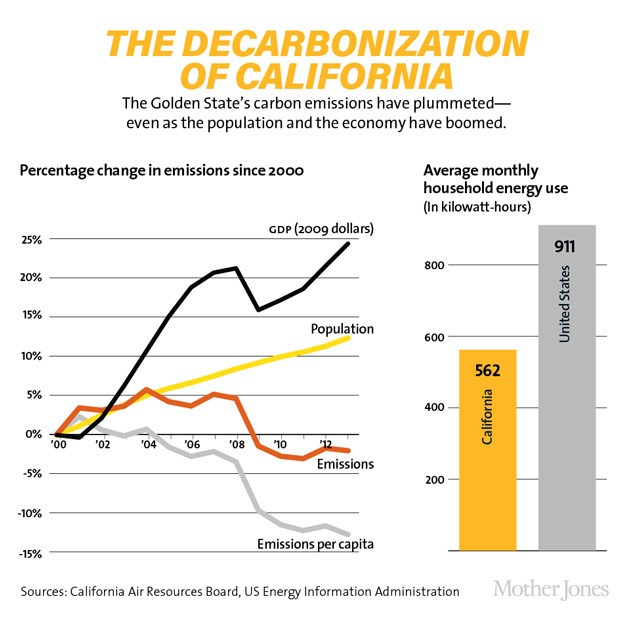 2) Rejoin the Paris Climate Accord.

On Dec. 12, 2015, representatives from 196 nations met in Paris to adopt measures to cut down on climate change emissions, use green energy sources and limit the rise of global temperatures. During the first week of June, 2017, President Trump disgracefully pulled out from this historic agreement.  Despite the US withdrawal from the pact, California continues to act as a global leader and model for intelligent environmental reform. California is working with Canada and Mexico to create its own pact and a group of California energy experts have traveled to Beijing to offer advice on cap and trade strategies.

3) Use a Cross-Disciplinary Approach.

The University of California, Irvine Sustainability Program is perhaps the most successful campus sustainability program in the world. It has already produced the “Coolest Campus” Sierra Club National Award two out of the last three years running. This cross-disciplinary programs draw sustainability scholars, executives, and investors from all over the world to see research in action and scientific progress toward eliminating the use of fossil fuels. Most recently twenty-two executives from South Korea’s largest producer of electricity, KEPCO, attended a two-week program sponsored by the Paul Merage School of Business and the Samueli School of Engineering at UCI.