PROBLEM
According to some with a weapons industry bias, North Korean missiles now threaten the West Coast of the United States. Yes, even Orange County. Maybe?

Yet, we spend too much on the military. As President Dwight D. Eisenhower put it best in his Farewell Address in 1961:

“In the councils of government, we must guard against the acquisition of unwarranted influence, whether sought or unsought, by the military-industrial complex. The potential for the disastrous rise of misplaced power exists, and will persist… Only an alert and knowledgeable citizenry can compel the proper meshing of the huge industrial and military machinery of defense with our peaceful methods and goals, so that security and liberty may prosper together.”

Cut our defense spending by one-third during the next five years. One suggestion for reducing our wasteful, even dangerous expenditures is to withdraw our 28,500 troops from South Korea. Even though President Trump promised that all options for stopping the North Korean nuclear weapons/ballistic missile program are on the table, I have heard no discussion of the withdrawal option. Immediate exits from Iraq and Afghanistan are also warranted. Within the budget left, intelligence and cyber security should take precedence over expensive new weapons systems. 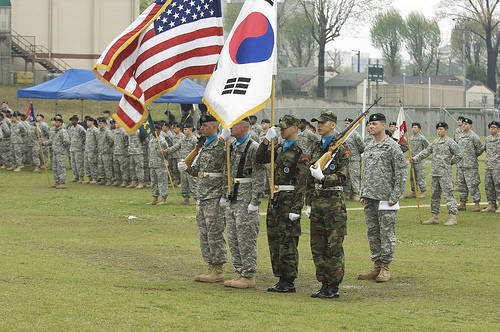 US soldiers in South Korea

According to the Stockholm International Peace Research Institute (SIPRI) the world total military spending is $1,686 billion, and the twenty nations spending the most are:

So the United States spends 36% of the world total.If you include our close allies in NATO and the Pacific we spend almost $1 trillion per year, well over 60%. On average nations spend 2.2% of the GDP on defense, we spend 3.3%. That’s nearly $2000 per person per year in the United States.

Further, all this money is being burned, almost literally, during a time when a human’s chances of dying by violence are the lowest in all history. You could never tell this by what you see on the TV news each night. But, the fact is deaths in wars and during crimes are at their lowest levels ever globally. Murder and war have never been more out of fashion. And we still spend billions every year.

As indicated just above we are now paying for the George Bush military spending splurge. Bill Clinton and the end of the Cold War brought a comparable Reagan splurge to an end with its nadir in 1999 at less than $400 billion. Since the election of Donald Trump his promised splurge has pushed the number to $603 billion for 2017. So a one-third cut is not unprecedented.

Here’s my reasoning. The North Koreans have been staring down the barrels of our artillery for almost 70 years. With that long lasting immediate threat as a political tool, North Korean leadership has been able to maintain a most cruel control over its own people. Remove the barriers and the cousins in the North and South and their respective governments will be in plain sight of one another. It will become most obvious to both the 25 million North Koreans and the 50 million South Koreans which system works better. Then they can negotiate their own peace.

So one way to resolve our conflict with North Korea is to withdraw all 28,500 of our troops from the peninsula. Think of the tax dollars we spend there, holding up that flimsy wall. Withdrawal may save great numbers of both American and Korean lives. The new President of South Korea is already involved in rapprochement with his northern cousins.

Without Americans at the border, would the North attack the South? That would be the equivalent of a home invasion robbery of your next door neighbor when she’s got her money and jewels in a safe deposit box at the bank. And imagine the international outrage. You may recall what happened when Saddam Hussein attacked his Kuwaiti cousins.

Perhaps the best way to predict what will work in our dealings with North Korea is to listen to North Korean defectors. In an interview with NPR, Lee So-yeon, a former member of the North Korean army explains the mindset that the Korean government instills in its people.When she was a soldier, state TV blasted nonstop in her office, she says.

“There’s a TV in every army barracks. When there was a nuclear test, state TV told us to feel proud, so we did,” Lee says. “Even when there were peace talks between North and South Korea, state TV told us it was a ploy by the South to take over our country.”

The media in North Korea do not merely report information. Instead, they’re a tool for the regime to stir emotion, especially when it feels threatened — as it does now, says Jeon Young-sun, a professor of North Korea studies in Seoul.

“Outside pressure on North Korea — sanctions or threats of attack — actually help the regime win domestic support,” Jeon says. “North Korea is as always on the defensive, and fear rallies people around their Dear Leader.”