Outside of NAFTA, China is our most important international trading partner. The Trump administration, because of its association with Peter Navarro, completely misunderstands the importance of our relationship with China. Peter’s three books about China are pure xenophobia. Death by China? Really?

China is no threat to the United States. Yes, they have a growing military budget, now 2nd in the world at $216 billion, far behind ours at $611 billion. But our huge trade interdependence makes war, for any reason, completely impractical for both. I have advocated in my work, that China is mostly an opportunity if we manage the relationship with calm reason. In 2006, I wrote China Now  with CEO and corporate adviser, N. Mark Lam, to provide entrepreneurs and investors with a comprehensive guide  to China’s people, negotiation styles, culture, history, economics, and business dealings. 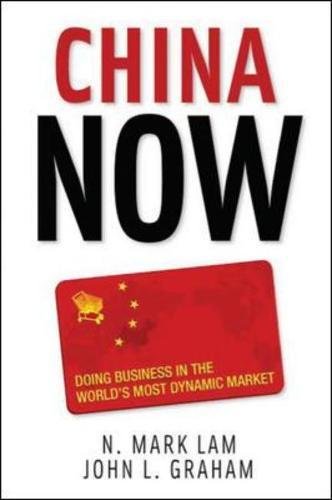 We must handle relations with China with our mutual opportunities in mind. Consider the current complaints regarding China’s policies on intellectual property rights. Let’s look at the facts. We track two trends important in this discussion – piracy rates and intellectual collaboration.

As can be seen in the following figure, piracy rates are declining in Hong Kong, China and the US. We do note that despite the lower piracy rate for the U.S., much more money is lost to software piracy in the U.S. than in any other country. The 2015 losses in the U.S. were $9.1 billion, China $8.7 billion, and Hong Kong $320 million. 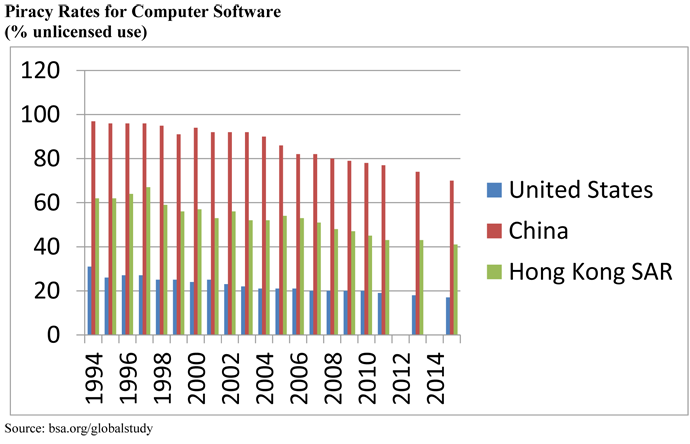 The growth of collaboration in invention is quite impressive as illustrated by the graph below. While the numbers remain small – the U.S. patent offices grants approximately 250,000 patents each year – this does demonstrate that collaboration in R&D is growing fast, more than doubling over the last five years. 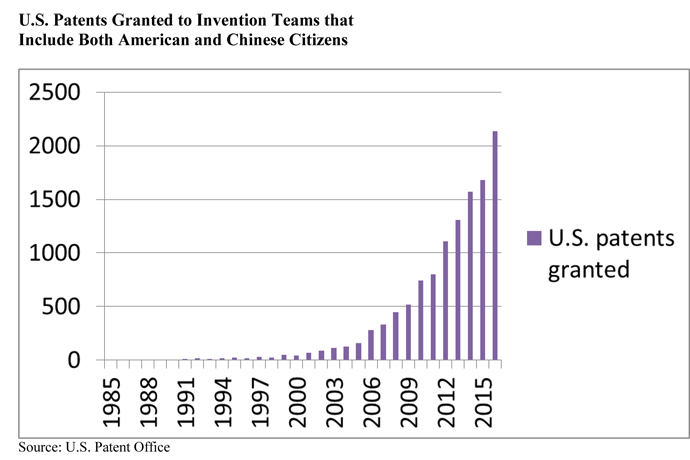 There are three axioms of international relations. (1) Trade causes peace; (2) politicians cause wars; and (3) wars cause deaths, on both sides. The trade involved in China’s entry into the World Trade Organization, PNTR, and the 2008 Olympic Games can be good for all concerned. Free enterprise has taken root in China and the seeds of democracy are there if one bothers to look. Trade is a kind of fertilizer for both.

It is abundantly manifest that no one is interested in attacking China, not North Korea or Japan, or even the United States. In fact, the reason China has a 2-million-man army is to control its own historically unruly population. But, before Middle East terrorism took center stage on September 11, 2001, China actually was the big threat America prepared for in the military exercises and budget meetings of the time. And, by the way, the United States does menace China, that is, if you count flying spy planes and sailing aircraft carrier task forces along their coast. Imagine Chinese military aircraft over Catalina or their submarines near the port of Los Angeles. Wouldn’t that be “menacing” to us? So, it just isn’t clear who’s menacing whom.

The reality is that today’s trade-based economic interdependence precludes anyone from attacking anyone. Despite the cacophony of saber rattling in Washington, Beijing, and Taipei, nobody can afford a war across the narrow straits separating the mainland from Taiwan. And democracy is coming to China fast anyway, via the pacific practices of commerce, WTO, Wal-mart, the 2008 Olympics in Beijing, the 2010 World’s Fair in Shanghai, and such.

China and the Unites States need each other. Everyone knows this. And, with growing globalization we certainly cannot ignore one another. So, at the political level we need to make policies based not on a fear of China, but on the recognition that trade ultimately keeps China on a path toward peace and global prosperity. China must be seen as an opportunity rather, than a threat. Such a positive perspective of the Middle Kingdom is good for the 1.2 billion Chinese on the planet, and the rest of us as well.

LEARN MORE:
For more detail regarding the U.S. China relationship see the The Long Institute’s annual report, the US-China Barometer. 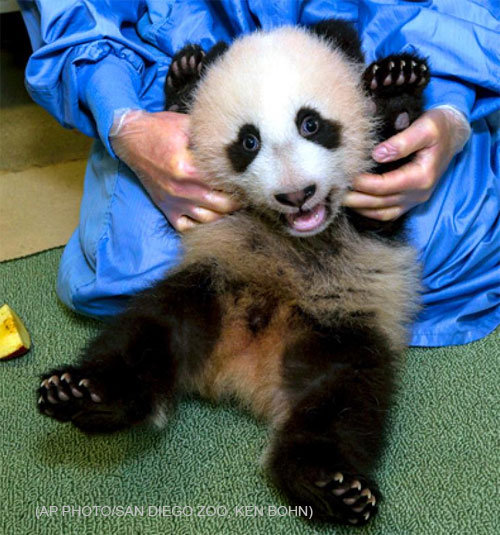 Xiao Liwu, a very cute result of a successful collaboration between China and the US, was bred and born at the San Diego Zoo. His parents are on loan to the zoo from China.